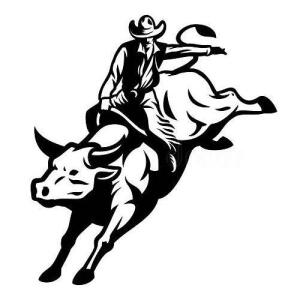 Tony Hooper, 59 years old, of Odessa, TX, passed on September 22, 2020 peacefully at his home surrounded by his loved ones.

Tony Hooper was born in Odessa, TX to Betty and Don Hooper on November 9, 1960. Tony rodeoed alongside his siblings with the Circle H Rodeo Company that his father, Don, operated. Tony began riding in the AJRA in 1968 and was the back to back AJRA Bull Riding Champion of the world at the young ages of 11 and 12 years old.

The Hooper family moved to Sonora, TX while Tony was in middle school. This is where Tony met his high school sweetheart, Linda Smith, and graduated from Sonora High School in 1979. Tony and Linda married on August 8, 1981 in Sonora, TX. In 1985, Tony and Linda moved to Odessa, TX where they raised their three children, Whitney, Joli, and Colt. Tony worked side by side with his father, Don Hooper, and siblings at the family business, Hooper Trucking Co. Tony carried on his love for bull riding by traveling to the Professional Bull Riding Finals since the 1980s. He was a lifelong fan of the Dallas Cowboys, Houston Astros, and Texas Longhorns. Tony’s most honored title was “Papa” to his three grandchildren, Levi, Branson, and Lindli. They were the lights of his life. Tony was a believer in Christ. The family finds peace in knowing that he is basking in the sunshine of heaven and walking hand in hand with his bride, Linda.

Tony is preceded in death by the love of his life, Linda Hooper; parents, Don and Betty Hooper; and in-laws, Bobbie and Joe Neil.

Tony is survived by his children, Whitney Hooper; Joli and spouse, Brody Gipson; and Colt Hooper, all of Odessa. Tony is also survived by his grandchildren, Levi, Branson, and Lindli Gipson of Odessa as well as a host of siblings, nieces, nephews, and cousins.

Arrangements are entrusted to Sunset Memorial Gardens and Funeral Home.  To send condolences to the family, please sign his guestbook at www.sunsetodessa.com.

To send flowers to the family or plant a tree in memory of Tony Hooper, please visit our floral store.